We were recently asked to support Barts Health NHS Trust with a series of two webinars, with the aim of improving their delivery of educational training to pharmacists within their territory. We suggested some preferred methods which would maximise engagement with their audience.

Our digital team produced an event portal which hosted event information, registration, webinar recordings and an online quiz. Delegates were then sent to the site to complete each stage of their training. 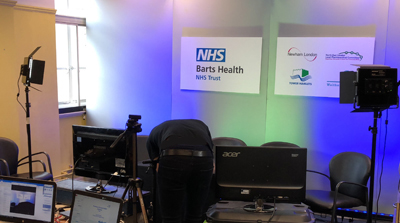 The webinars were filmed from the client’s offices and broadcast out live to the audience. We used a branded stage set behind the speakers to give the broadcast a professional look and feel.

It was decided that the webinars would run for an hour between 20:00 – 21:00, as this would not overlap working hours and people would have the option to dial in from the comfort of their home.

During the webinar, the speakers were able to launch a number of polls to the audience and collect instant results, which could then be shared and discussed. Delegates also had the opportunity to ask questions via a control panel, which were received and facilitated by the chair during the allocated Q&A slot. 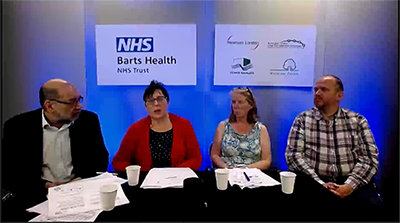 The immediate feedback from the client and audience was extremely positive and agreed that this was an effective (and convenient) way to deliver the training.

Upon completion of each webinar, our production team were able to edit and render the recording before uploading it onto the portal and making it available to view on-demand for anyone who was unable to attend the live events.

The series was a great success, and the client is now looking to use this format moving forward.

Everyone has been really flexible and responsive to our needs, and the tech team were totally amazing and helpful. The feedback from the trainees so far has been really positive.

Want to run a similar project?

Come and talk to us

Get in touch
We use cookies to give you the best possible experience on our website. Find out more.